Converting the OverClocked Remix RSS to a Twitter Feed

OverClocked Remix (OCRemix) is a website dedicated to serving high quality remixes of music from video games. The RSS feed is occasionally updated with the latest ten new songs that are posted on the site.

This post is about a server daemon project I wrote a year ago — it polls the RSS feed of OCRemix periodically, and converts new results to a Twitter feed. The results can be seen at @newOCRemixes on Twitter. It’s been running on Heroku 24/7 for the past year without any problems. Source code is here.

The rest of this post goes into the design and development of this project, so if that doesn’t sound interesting to you, now is a good time to hop off this train.

I’ve been listening to music off of OCRemix ever since 2002. The way I used to find new songs was to repeatedly visit their website, look for new songs, and then click through three or four links for every new song that was posted.

So I set out to figure out how to make it much, much easier to hear new songs and download them if I liked them.

OCRemix has it’s own Twitter feed, which they will use to post new remixes, but it’s not exclusive to providing just new songs: 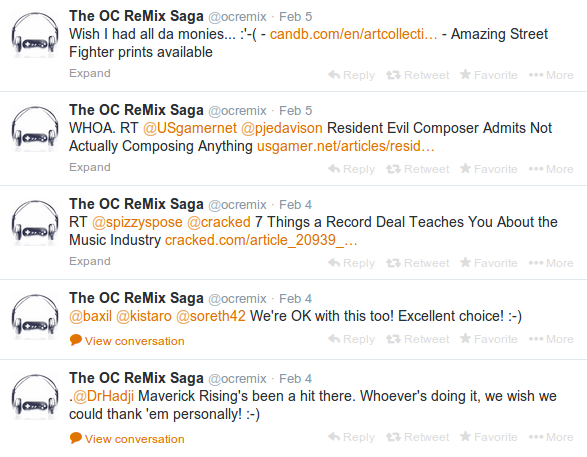 Twitter happens to have this nice feature that they call cards. Cards are essentially a feature that detect certain types of URLs, and display information within the tweet that would only be accessible from visiting the URL. One of the supported card types are Youtube links, which will embed a Youtube video into a Tweet whenever a Youtube link is detected. 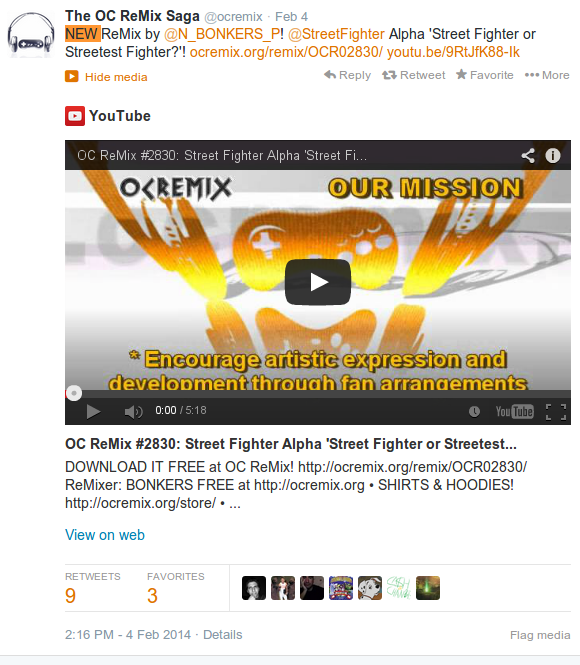 and sometimes they don’t:

They also have their own Youtube channel where new songs are posted, but similarly to their Twitter feed, it is not exclusive to new songs.

Since I was already using Twitter as a news feed, I chose that as my target platform for receiving new song notifications. The following is a list of some of the things I wanted out of my Twitter feed system.

Initially, I wanted to implement direct download links within each Tweet in order to simplify the process of downloading the mp3 for new songs. However, because ocremix.org is non-profit and receives advertising money from the main website to pay for bandwidth, I chose to just link to their site to download out of politeness.

This is what the final version of my implementation looks like:

Assuming this information fits into the 140 character limit, each one of these song tweets is composed of the following:

The actual project was implemented using Scala. The main libraries used were Dispatch for OAuth and talking with Twitter’s API, and Akka for the periodic polling of the RSS feed.

Trying to detect whether or not a Tweet will fit in 140 characters is tricky, especially if there are URLs in the Tweet. Twitter will automatically shorten URLs for you — the caveat is that the length of the shortened URL is what counts to the 140 character limit, and not the size of the original URL.

So how do you figure out what the shortened URL size will be? Twitter happens to have a configuration API that will tell you the current length of URLs (https links are one character longer than http). Since this number can change, it can’t be hardcoded into the system. It’s also not a number that is likely to change often.

To take this varying URL length into consideration, the previously known shortened URL length is cached in memory for quick usage. I poll the configuration API every 24 hours to check for and update the URL length cache if necessary.

Sometimes there’s just too much information to include in 140 characters. Going back to my design goal of making it easy to hear new songs, the Youtube link is the most important thing to include in the Tweet.

Here’s a shortened version of the code that figures out what to put into a tweet:

Unless Twitter plans on upping the shortened URL length to ~135 characters, or the ids start incrementing in several orders of magnitude per new remix, the smallest tweet content (songId,youtubeUrl) is good enough.

There’s a reason songId is included in all of the possibilities as well, more on that later.

In order to make sure I received a notification whenever something breaks, every single method that could cause an error returns an Either[_, String], where the Right case stores the successful result, and the Left case stores a string explaining what went wrong. Whenever a method is completed with the Left case, a direct message is sent to my own personal Twitter handle, with information about the failure. 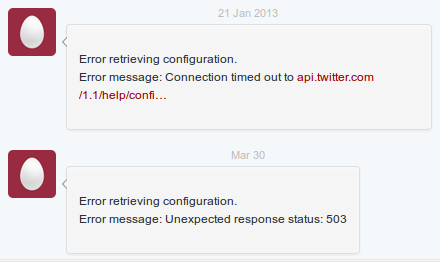 Some examples of methods that might fail that I want to be alerted about if they do:

(In retrospect, just using Future[String] would have been enough, since it stores the exception information in case of failure… but keep in mind I did write this code as a novice just as I started learning Scala).

Polling and Parsing the RSS Feed

There’s nothing particularly fancy about this part — it mostly consists of periodically polling OCRemix’s RSS and parsing out new songs to post on Twitter.

Here’s the code that schedules an RSS polling check every half hour:

In order to figure out whether or not a song is new, I send a request to Twitter’s API to retrieve the @newOCRemixes Twitter Timeline, check the last Tweet’s songId, and make sure any new song I post happens to have a songId greater than the one on the timeline.

All of this mostly works. There are a few problems that were more complicated to solve than the time I wanted to spend on this.

One of these problems happens to be that the RSS feed only stores the 10 latest new songs — if there’s ever more than 10 songs posted within a 30 minute interval, any songs prior to the last 10 will not get posted. This has only happened once since I’ve launched this project, but there’s not much that can be done about it, short of asking for the OCRemix owners to not post so many songs at once, or up the number on their RSS feed.. or polling the website itself, and parsing the song URLs from raw HTML.

Another problem (that hasn’t actually been much trouble so far) is that the error message reporting is dependent on Twitter’s API working. If there’s a problem with the directMessage call to send me a message on errors, I won’t be notified. I could have solved this by setting up a secondary notification system such as email, but errors happen so rarely that it wasn’t worth the trouble.

The third and last problem that I’ve run into is actually not one I can do much about. The Twitter card feature for Youtube videos sometimes won’t work — a few Tweets just won’t embed a Youtube video into the post, even if there’s a valid Youtube URL in the message.

Having said that, I’m pretty happy with the results — it’s been working without a hitch for the last year since it’s been deployed.